Corpus Masoreticum: The Inculturation of the Masora in Western European Jewish Learning Culture from the 11th to the 13th Centuries. Digital Development of a Forgotten Culture of Knowledge 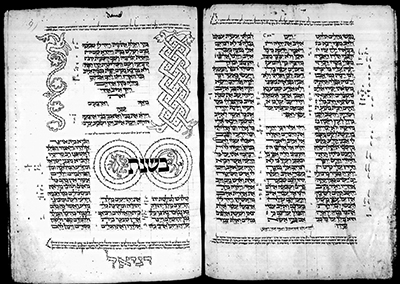 The Masorah of the Hebrew Bible has come down to us in various recensions within Biblical codices as well as in separate treatises. Until today, only the oriental Masoretic tradition had been dealt with in a scholarly fashion. The aim of this project is the firstever scientific engagement with the Western European (Ashkenazic) Masorah tradition between the 11th and 13th centuries, which differs from the oriental Masorah not only with respect to the philological content but also regarding its layout and mise en texte as masora figurata.

By means of certain exegetical and artistic features, the Ashkenazic scholars tried to integrate the oriental Masoretic tradition that was originally developed as linguistic grammatical knowledge vis à vis Islamic punditry into Western European Rabbinic lore and law.This inculturation was conceivably influenced by the Christian environment (theology; iconography, book illumination, architecture). The anticipated results in this project will shed new light on the European history of the Masoretic Bible and its interpretation, and yield important scientific impulses not only for Jewish Studies, but also for Jewish and Christian theology as well as medieval art history.

The philological work will be integrated into a digital work environment (BIMA Biblical Masora database), which will be hosted by the Abraham Berliner Center at the Center for Jewish Studies Heidelberg, and whose edition files and raw data will be incorporated by the University library Heidelberg after the project's termination.