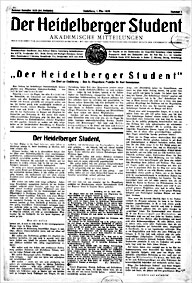 The history of the university and student press remains barely researched up until today. Nonetheless, the academic press is able to reveal much about the self perception of a university and its students. Through the digitalisation of "Der Heidelberger Student" the University Library has made available on the Internet an important source of the local university history.

"Der Heidelberger Student" shows how the student press in Heidelberg was soon misused by the National Socialists as a medium of publication as well as of propaganda. This although "Der Heidelberger Student" (it replaced the "Akademische Mitteilungen" in 1929) had aspired to be an "independent" and "responsible" student magazine. Soon, however, there was no sign of cosmopolitanism or pluralism anymore – characteristics once true to the motto of the university, "semper apertus". As a result of the "Gleichschaltung" (a law requiring ideological conformity across society), "Der Heidelberger Student" deteriorated to become a mouthpiece for the National Socialists, promoting their fascist-nationalistic ideology.

From 1935 aggressive attacks against Jews, freemasons and the church actively stifled the "living spirit" once evoked by Friedrich Gundolf. The independent student magazine had become a "propaganda newspaper for the National Socialist German Student Association" – which was also the magazine's subtitle from the summer term 1935 on – and consisted of blatant propaganda for National Socialist ideology.

Within the framework of its digital library, Heidelberg University Library grants access to historical documents for research and teaching purposes.

Note that this collection also contains journals and newspapers from the National Socialist era. Heidelberg University Library emphatically dissociates itself from the opinions expressed in any racist, violence-glorifying and National Socialist content.