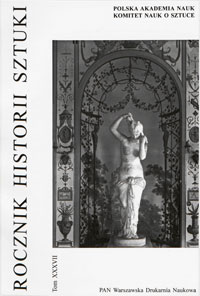 The journal Rocznik Historii Sztuki was started by Professor Juliusz Starzyński in 1956 as the official organ of the Art Institute of the Polish Academy of Sciences (PAN), replacing its predecessor, tainted by Marxist ideology. Since then, the 'Annual' has been neutral as regards politics, viewpoint and methodology, as it publishes exclusively scholarly papers, and runs no current issues, chronicles, reviews, letters to the editor or polemics etc. sections. For a dozen years now, its only publisher has been PAN’s Committee on Art History. The journal is one of Poland’s three most important art-historical periodicals.

Traditionally, the journal has published mainly extensive texts (of about 50-80 pages, which are too long for quarterly publications), with the subject matter ranging from he Middle Ages till (seldom) contemporary art, as well as methodology and the history of art history. The majority of articles deal with Polish art history, but for a few years the space devoted to general (mainly European) art history has increased. The journal is published in Polish, but the number of texts in foreign languages is steadily growing. Fairly often the issues are theme-specific (so far have appeared issues focused on e.g. Rembrandt, gardens, the art of Gdańsk [Danzig], or volumes dedicated to particular scholars, e.g. Karolina Lanckorońska, Adam Miłobędzki).