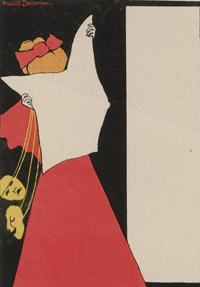 Due to its focus on “European Art” Heidelberg University Library holds a major collection of historical art journals.

Within the context of the project “The European Perspective: Digitization and subject cataloguing of illustrated art and satire periodicals of the 19th and early 20th century” from 1st August 2013 to 31st July 2015 about 20 European art and satire journals were digitized and made available online. The aim was not only to allow free digital access to these eminent historical resources but also to achieve an in-depth subject cataloguing of texts and images.

The indexing of French and English caricatures dating from 1841 to 1872 and from 1894 to 1914 offers a “European perspective” on important historical events that were meaningful and formative for Europe, such as the revolutions of 1848, the Franco-Prussian War and the preliminary events leading up to the First World War. Furthermore the illustrations mirror the sociological changes of their time as well as the development of styles in caricature.

In the course of the project “Digitization and subject-cataloguing of illustrated art and satire periodicals of the 19th and early 20th century” which ended in July 2013 and which was also supported by DFG, 45 German and French art journals were digitized and indexed.

Apart from these third-party-funded activities further art and satire magazines are digitized, thus 220 journals are currently made available online by Heidelberg University Library.

An alphabetical list of all periodicals as well as a summary organized by year of publication can be found here.

Requests and suggestions to