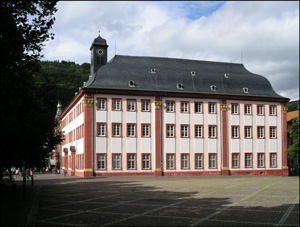 Matriculation records are one of the most important sources for researching the history of the University.

For the period 1663–1668, Toepke was able to refer to a transcript from the General Archive in Karlsruhe, and published this in his second volume (Anhang I).

Only handwritten matriculation records exist for the years 1871 to 1936. These have been made available for digitization by the University Archives.

Toepke did not limit himself to deciphering and printing the lists of university members. He also made comments, collated from the preserved files of the university and the faculties, listing details about the careers of the individuals at Heidelberg University. This included, amongst other things, lecture lists, the oldest booklists and lists of graduates from the faculties.

Questions, comments and criticism should be addressed to the Digitalisierungszentrum.