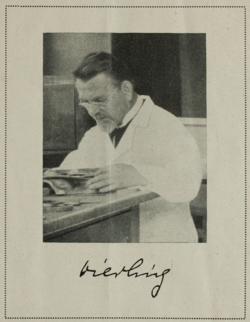 August Vierling was born in Oberachern in the Black Forest on July 20, 1872, the son of Alois, a master linen weaver, and his wife Wilhelmine. He attended elementary school between Easter 1879 and Easter 1887, then began a 3-year painter's apprenticeship in Achern in August of the same year. After a journeyman's year with his former apprentice in Achern, Vierling worked for six months in a Frankfurt store for sign and lacquer painting. In October 1891, he was admitted to the School of Arts and Crafts in Karlsruhe. He graduated in 1894 after 3 years of intensive training with great success. In Karlsruhe he also met his future wife Anna Dissert. Following his school education, Vierling took a job in a Leipzig store for decorative and church painting. Forced by pleurisy, he returned home at the end of 1896. After recovering, Vierling began to create designs on a freelance basis for his former training center in Karlsruhe. In 1900, on behalf of the Baden Trade Association, he traveled to the World's Fair, which was to be held in Paris that year, for study purposes.

In December 1901, August Vierling was hired by the Heidelberg anatomist Hermann Braus (1868-1924). The painter and draftsman now became "microscopic preparator" and was responsible for creating and drawing histological sections. Together with Braus, he developed a series of models on human development (Die Entwicklung des menschlichen Gehirns, Series 4b, Ziegler Werkstätten, Freiburg i. Breisgau). Vierling also drew many illustrations for Braus for his textbook "The Anatomy of Man" - in a way that was more exemplary than any other before him in Heidelberg. To this day, these illustrations are a model for medical illustrators all over the world in terms of detail and drawing skills.

In April 1902 he married Anna; his steady employment now allowed him to plan for the future. His first child, August, was born the following year. Three years later the couple had a second son, Otto, and in 1908 his daughter Maria was born.

After Braus went to Würzburg, Erich Kallius (1867-1935) came to Heidelberg in 1921. He intensively supported Vierling, who was now able to work his way up to the position as the first university illustrator. He produced countless drawings for his publications and for use in the lecture hall, as well as models that served as the basis for drawings, among other things.

After the death of Kallius, Vierling, who had already been allowed to work extremely independently for years, tried to work intensively on what his former superior Kallius had failed at until his death: He wanted to find out the mechanisms responsible for the prenatal development of the thyroid gland. For this, Vierling was even allowed by the ministry to work beyond his retirement. Like Kallius, Vierling failed in this task; his non-scientific training and the state of the art at that time did not enable him to answer such an academically extensive question. The factors controlling the migration of the thyroid gland were in fact approximately clarified many years later, in 2010, by the usage of new methods.

Vierling received several offers from other universities - but the Berlin publisher Springer was also interested in him. There, his former colleague and now dermatologist Marie Kaufmann (1877-1922) wanted to help him settle there with his family. But Vierling and his wife did not want to leave their home. They remained, despite interesting offers, always connected to their homeland.

After a long illness, August Vierling had been suffering from diabetes for years, he died in Heidelberg in 1938. His drawing masterpieces and models, rediscovered a few years ago, are considered his legacy in the Heidelberg Anatomy.

Many of Vierling's drawings are still represented in current anatomy books, especially in the field of the musculoskeletal system and embryology, his drawings are still unsurpassed in accuracy and depth of field (repro of a book page Benninghoff & Drenckhahn; repros of current drawings/screenshots from the Internet). He drew, contrary to the working method of most colleagues, macroscopic and also microscopic preparations directly from the original and did not reproduce the work of others. Vierling was reproduced.

In addition, he also made histological sections, reconstructed structures relevant to research and then, layer by layer, reconstructed a model from them. For other scientists this was certainly already a final product, but for Vierling it was merely a necessary product for further discussion and research.

Vierling was not only a very popular member of the department, he was a visionary and ahead of his time in his working style and results - he set his own standards.

Photos and drawings from the estate of August Vierling (Heid. Hs. 4132)