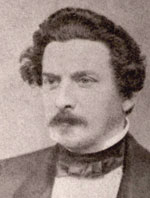 Johann Anton Nuhn was born on June 21, 1814 in Schriesheim, near Heidelberg. He presumably came into contact with anatomy at a very young age as his father was employed as a diener.

This relationship made it very easy for him to live in Heidelberg, because he could stay at the house of his father's substitute, Jacob Eberle. Beginning in the winter semester of 1834 he studied anatomy under Tiedemann and Kobelt. In the summer of 1838 he received his doctorate in Heidelberg. Four years later he became "Privatdozent", and in 1845 "Prosektor". In the winter semester of 1848 he was appointed associate professor.

At the age of 60 he became an honorary professor, at which time Max Fürbringer assumed his position. Nuhn discovered the Nuhn- or Blandin-Nuhn-Gland (anterior lingual gland) at the tip of the tongue. He researched the lymphatic system and its relationship to the venous system, and described the processus vaginalis, an important structure to surgeons for its importance in hernia repair. Nuhn performed many dissections and his publications document his affection for anatomy.

He paid close attention to anatomical variations and after 40 years in the gross anatomy laboratory he wrote a very detailed dissection manual used by students as well as physicians. He also compiled a book of anatomical plates for surgeons. Nuhn integrated a selection of surgical procedures with special techniques or ligatures, similar to an earlier work by Bougery and Jacob. He died on June 27, 1889 in Heidelberg at the age of 75. His discoveries are still cited in anatomy or surgery textbooks.