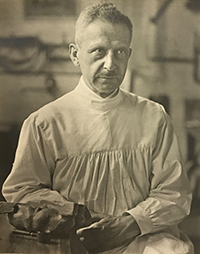 Erich Kallius was born in Berlin in 1876. He began his medical studies 1885 in Freiburg and completed it in Berlin under the well-known anatomist Heinrich Wilhelm Waldeyer (1836-1921). In February 1892 he passed his state examination in Berlin and afterwards went to the Anatomy Department of Göttingen, where he habilitated two years later. Friedrich Merkel (1845-1919), his very popular mentor, probably influenced Kallius ’ to his morphologically-histologically work. After a short stop in Gießen, Kallius went to Greifswald in 1907. During the war he also worked as a surgeon in a hospital. He then went to Breslau to take over the chair of the well-known vertebrate morphologist Ernst Gaupp (1865-1916). In 1921, Kallius not only became chair of the Anatomy Department but also Dean and Rector of Heidelberg University.

Kallius was a passionated teacher and his main research focus was Embryology of the developmental stages of the neck and head area in different species and men. Together with the draftsman August Vierling, countless reconstruction waxplate models were created that showed these stages. Kallius was also interested in the further development of histological technology. After Merkel died, Kallius edited his textbook “Allgemeine Gewebelehre. Grundzüge der Entwicklungslehre”1. He also contributed articles to the "Encyklopädie der mikroskopischen Technik"2, became co-editor of the "Anatomische Hefte"3 and its continuation booklet, the "Zeitschrift für Anatomie und Entwicklunggeschichte"4. In addition, Kallius was very interested in art – he also had a great talent for drawing. Erich Kallius was buried in the cemetery in Heidelberg Handschuhsheim in January 1935.