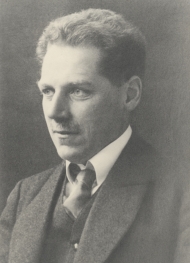 Hermann Braus was born on 15.8.1868 in Burscheid near Aachen. After the early death of his sister he grew up as the only child of Otto Braus and his wife Bertha Ernestine. When he was 20 years old he enrolled at the University of Bonn and began studying natural sciences, however he subsequently moved to Jena, where he began to study medicine and also met Max Fürbringer.

His friend Heinrich von Eggeling (1869-1954) described Braus as a faithful, ambitious, always self-controlled and critical student.. In the winter of 1892/93 Braus received his state certification and was appointed to a position at the University of Jena. Braus worked together with his friend Leo Drüner (1870-1940) in the anatomy collection, improved a few optical instruments in collaboration with Carl Zeiss, and developed the „Präparierlupe nach Braus-Drüner“ (binocular magnifying glass for the examination of very small animals such as water fleas).

His first research endeavor involved the nervous system of fish. This became the basis for his dissertation in 1892 entitled („Über die Rami ventrales der vorderen Spinalnerven einiger Selachier“). He embarked on numerous expeditions e.g. to Bergen and to the Mediterranean coasts in search of new research material. Braus became increasingly interested in microscopic anatomy as he began to explore the different phases of cell development. His later research involved the innervation of the fish limb musculature.

Braus was not only very close to Fürbringer professionally; he married Fürbringer‘s daughter Elisabeth, and they had 3 children. In 1899 Braus went to Würzburg where he accepted a professorship. However, when Gegenbaur resigned in Heidelberg and was replaced by Fürbringer, Braus was asked to follow. Early in the 20th century Braus began his research on living animals. Continuing to pursue his interests in the development of peripheral nerves, Braus transplanted embryonic limbs from toads onto other toads in atypical positions and observed their development, as Gustav Born (1851-1901) from Breslau had done before him. He also performed electrophysiological examinations of living rays and sharks, which he dissected afterwards to look for the structure of the motor end plate.

When Fürbringer retired, Braus became the head of the Institute, and teaching now became his main focus. He always incorporated the newest techniques, and integrated x-rays, drawings, projections, movies and pictures into his instruction. Marie Kaufmann-Wolf (1877-1922), one of his students, helped him document the collection by taking myriad pictures of the dissections.

His book „Anatomie des Menschen“, published in 1921, led to a very controversial discussion; as he left the path of purely descriptive anatomy and began focusing instead on the correlation between function and structure. In 1921 Braus went back to Würzburg, this time to become their first anatomist. Braus died on the 28th of November in 1924 of renal failure.