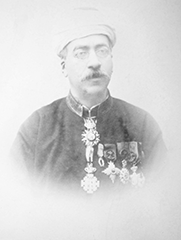 Yaʿqūb Ṣannuʿ, يعقوب صنوع or James Sanua -as he transliterated his name himself- was born in Cairo, in April 1839, to an Egyptian Jewish couple with Spanish Sephardic roots. He studied the books of all three monotheistic religions and, at the same time, Hebrew, Arabic, English, and Italian, under the supervision of his father Rafāʾīl. Impressed by the precocity of the young talent, Aḥmad Yakan Bāsha, his father's employer, granted him a scholarship, which made it possible for the thirteen-year-old James to complete his studies in Italy. He arrived in Livorno in 1853, where he acquainted himself with Italian drama and the ideas of Mazzini's Young Italy movement.

In 1855, Sanua returned to Egypt and became a private teacher. Finally, he attained a position at the Ecole Polytechnique (al-Muhandiskhana) where he taught from 1868 until 1871. At the same time, he was employed as an examiner at governmental schools.

On 25 February 1868, he was initiated to the Egyptian Masonic Lodge La Concordia. He ascended to the degree of a Master on 24 December of the same year. Sanua was a very active Freemason during his entire life and a member of different lodges such as the Kawkab ash-Sharq led by the famous Jamāl ad-Dīn al-Afghānī.

In 1870, when Sanua was still busy teaching at the Ecole Polytechnique, he decided to start his Arabic theatre. Sanua was inspired by the performance of an open-air café concert by an Italian group. Like other pioneers of the Arabic theatre, Sanua started by translating European plays into Arabic, before attempting to write his own. For his first play, Sanua cast some of his students from the Ecole Polytechnique. After his initial success, Sanua applied to the Khedive for a regular income for his group, like that usually paid to the European theatre companies. He was therefore invited by the Khedive to perform at his palace Qaṣr al-Nīl. On this occasion, his group performed three of his comedies, anīsa ālā mūḍa (The Fashionable Young Lady), ghandūr miṣr (The Egyptian Dandy), and al-ḍurratayn (The two Co-Wives). Sanua reports that after the first two plays had finished, the Khedive was so delighted that he came up to him onto the stage and said: “You are truly the founder of our national theatre, you are our Egyptian Molière.” Nevertheless, the third play's harsh criticism of polygamy created problems. After witnessing the struggles of the main character Aḥmad's two co-wives, the Khedive was furious and told Sanua that if he were not man enough to satisfy two wives, he should leave the ones alone who were able to do so.

By the end of the year 1871, Sanua's theatre was shut down and he became more involved with Freemasonry. In 1873, he established the Lodge of Progress (Maḥfal at-Taqqadum), which was mainly attended by students and officers. After its forced disappearance in 1875, Sanua established the Society of the Lovers of Knowledge (Jamʿīyat al-muḥibbin al-ʿilm). According to Sanua, shaykhs and students from the Azhar institutions became members of this lodge as well as Jamāl ad-Dīn al-Afghānī. The second one of his secret societies was forcedly closed too and in 1874, Sanua departed for a long journey through Europe.

Back in Egypt in 1878, Sanua founded a satiric newspaper, to raise national and political consciousness among the Egyptian people. However, his first Abū Naẓẓāra Zarqā (The Man with the Blue Glasses) lasted only two months before being forbidden. By the end of June 1878, after two failed attacks on his life, Sanua was finally forced to leave his beloved homeland and go into exile. Nevertheless, in less than eight weeks after he departed from Egypt, Sanua was ready to continue publishing his newspaper, even in a slightly changed format, with a caricature on the cover page.

In Paris, Sanua held lectures in different literary circles and actively participated in Masonic lodges. He claims to have been in touch not only with the most outstanding exiled Egyptians in Paris but also with the most important French politicians up to the rank of President. In public, he usually performed as the “over-orientalized” character, Shaykh Abou Naddara, who displayed his long robe, turban, and his multiple decorations. Sanua most obviously fought for a free Egypt - free from the local tyrants and the British occupation. At the same time, he kept loyal to the Sultan as the representative of the Islamic Umma (community of the faithful) throughout his life. Most importantly, the Egyptian exiled nationalist constantly tried to mediate between “the East” and “the West” and always displayed a special sympathy for Islam.

As far as family is concerned, in 1884, Sanua married a French Jewish lady, Zélie Blumenthal with whom he had two children, Hilmi and Louli (1886-1967). After a long active life as an editor of his diverse magazines, James Sanua retired in 1910, only two years before his death. His grave can still be visited in the Jewish section of the Montparnasse cemetery in Paris.