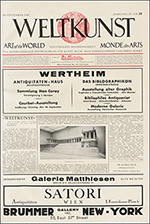 The artist, collector and critic Walter Bondy founded the art market magazine Die Kunstauktion. in 1927. He set out his intentions for the magazine in an editorial in the first issue, dated 15th October 1927, where he proposed accurate, trustworthy reporting of the art market in the same manner as newspapers for the financial markets. Bondy and his editorial colleagues consistently applied these intentions with auction reports and results, as well as news from the art trade, collections, museums and art historical research. This sheet, in newspaper format, appeared weekly with up to 14 pages and became the most important mouthpiece for the German art market. The “News from Everywhere” page offers an inexhaustible wealth of information from every conceivable field of art. Sometimes the commentaries are quite amusing, for example those written by Kurt Kusenberg using the pseudonym “Simplex”.

In 1929 J.I. von Saxe von Bondy took over the role of editor. In order to appeal to a larger audience in addition to focusing on the auction market, Saxe searched for a new name with the help of a jury. On the 28th September, 1930, the magazine appeared for the first time under the name Weltkunst, which it still bears today. From 1934 the publisher belonged to Carl August Breuer, who partly ran it from Paris because of the Gleichschaltung by the National Socialists. As with all other publications, Weltkunst was answerable during the Nazi era to the Reichspressekammer. Overt propoganda articles rarely appeared and the desire to reports things objectively is perceptible, and reading between the lines other views can be discerned, but whether it wanted to or not, Weltkunst was deeply involved in the trade with items confiscated from Jewish citizens, from the meticulous announcements of auctions and sales of collections, up to and including printing lists of auction results. Up until the last years of the war, the advertisments and preliminary reports were accompanied by countless auctions from unnamed private collections and borgeois apartment liquidations – a large part of which had to do with racial fanaticism, deprivation of rights, expulsion and state terror.

The digital versions of Die Kunstauktion and Weltkunst from 1927 to 1944, open up an enormous archive of art events from the Weimar Republic and Nazi era. The volumes published during the Third Reich are also an important source of provenance research in cases of looted art. In 1943 the Berlin editorial offices of Weltkunst, which also included a public reading room, were bombed and the work moved to Nauen. On the 15th September 1944, publication was finally brought to an end by „attempts to concentrate the press as a result of the total war.“ In 1949 the Breuer family started afresh in Munich, and since then “World Art” has appeared without interruption. After several changes of ownership, it has belonged to the Hamburger Zeitverlag since 2005, who also publish Die Zeit. The editorial office has been back in Berlin since 2012.