In retrospect: The Codex Manesse and the Discovery of Love 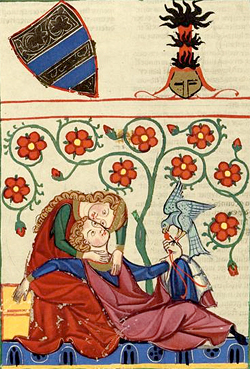 As a contribution to the 625th anniversary of the University Heidelberg University Library presents its most precious treasure, the Codex Manesse, in the original.

The exquisitely illuminated large format manuscript is one of the most famous medieval manuscripts. It was created at the beginning of the 14th century in Zurich presumably due to the initiative of Johann and Rüdiger Manesse. The manuscript unites the entire range of Middle High German lyric, in its diversity of form and genre. The oldest texts in the Codex Manesse reach back as far as the mid 12th century, and many of the poems are uniquely documented here: The Codex Manesse is, thus, one of the key testimonies for the literature and culture of the Staufer dynasty.

The texts are preceded by a total of 138 miniatures with idealistic portraits of the poets. The songs are arranged according to the rank of the authors. The first illustrations depict the most noble of all poets, the Staufer rulers Emperor Henry VI and King Konradin. Dukes and gentlemen are followed by professional poets such as Walther von der Vogelweide or Wolfram von Eschenbach.

The predominate theme in the Codex Manesse is the “Minne”, the intimate courtly love between men and women. Whilst courtly love was of no importance in the written records of the Early Middle Ages, in the Staufer era love was discovered as the literary topic and became the subject matter of complex social debates.

Hence, it was no longer sufficient for a knight to only possess the lady he adored, he moreover had to ‒ as was continuously reflected and discussed in numerous texts and illustration ‒ be loved by her. Thus, the discourse on courtly love not only influenced the relationship between the sexes but also altered the gentry’s self-image and the forms of etiquette within courtly society. The lyrics and illustrations of the Codex Manesse exemplary capture these changes.

The exhibition is displayed within the context of the large medieval exhibition “The House of Hohenstaufen and Italy” in the Reiss-Engelhorn-Museums Mannheim from 19th September 2010 until 20th February 2011.

The exhibition was put together in close collaboration with the Institut für Fränkisch-Pfälzische Geschichte und Landeskunde, the Germanistisches Seminar and the University Libary as well as a group of committed students from the Historisches Seminar of the Ruprecht-Karls-University.