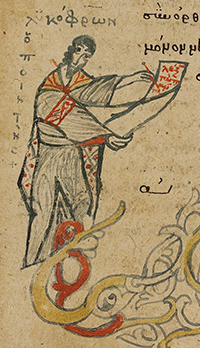 A collaboration between the universities of Cambridge and Heidelberg, financed by the “The Polonsky Foundation”, will allow over 800 Greek manuscripts to be digitized and catalogued. This means that a significant part of Greek manuscript heritage will be made both visible world-wide, and accessible for research purposes.

Heidelberg’s part of the project involves 423 Greek manuscripts, which are part of the Bibliotheca Palatina collection, as are the 848 German and 2.030 Latin manuscripts which have already been processed. 29 of the codices were returned to the UB Heidelberg at the beginning of the 19th century and have already been ditigized. The remaining Palatini graeci, just over 400 of them, have been kept since 1623 in the Biblioteca Apostolica Vaticana. Up to now the only source of information about this collection has been a catalogue dating from the end of the 19th century.

It is intended that these two aspects, of cataloguing and describing these manuscripts, together with making them available online, should in the future provide a complete and scientifically adequate basis for interdisciplinary research into manuscripts which were previously very hard to access. It is also to be expected that the projects for recording and digitizing these collections, will lead to new insights for research into the history and significance of the Bibliotheca Palatina.

As well as cataloguing manuscripts in accordance with DFG guidelines concerning use of the TEI-P5 format, a tight process of interconnection of the descriptive information with the digital facsimiles that appear online during the project will occur.

In addition to the project running simultaneously in Cambridge, whereby around 400 Greek manuscripts from the University library and various colleges, including Trinity College will be digitized and catalogued, a more intensive exchange between the university libraries in Heidelberg and Cambridge has been agreed.