Bibliotheca Laureshamensis – digital: Virtualization of the Monastic Library of Lorsch 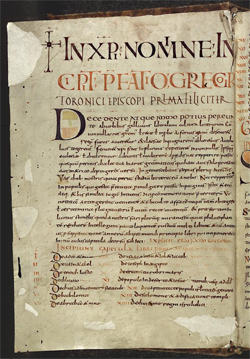 The project's aim is to virtually reconstruct the monastic library of UNESCO-World Heritage Site Abbey Lorsch, and thereby to make the Abbey’s intellectual foundation and moreover the Carolingian world picture visible and researchable.

Almost no other library from the Early Middle Ages, reconstructable today, accomplished a comparable achievement in synthesis than Abbey Lorsch. It was one of the centres, in which ancient heritage was secured beyond all following disruptions through transcriptions, comments and further editing. Especially in Lorsch an immense amount of knowledge not only from Mediterranean regions but also from Irish and Anglo-Saxon abbeys was transferred and introduced into Carolingian and medieval culture, and circulated from there establishing a foundation for medieval science, literature, fine arts and bibliology. For the Humanists Lorsch’s monastic library was still of such interest that the collection became the core of Ottheinrich’s library, the Bibliotheca Palatina, in Heidelberg, and contributed notably to its fame. Especially the Carolingian inventories enable us to reconstruct the Lorsch codices, which today are spread all over the world.

With their significance for the medieval culture of knowledge, writing and cloisters only few images of the manuscripts, which are distributed over 68 libraries, so far exist, and thus the accessibility and verifiability of manuscripts through digital images presents a significant advancement. Furthermore, the virtual reconstruction of the library is complemented by manuscript descriptions, which will be researchable in a database. Links to existing manuscript catalogue entries and text editions are to make this unique collection suitable for further academic research in different fields.