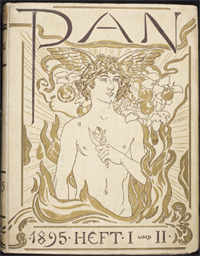 The journal PAN, which was published in Berlin between 1895 and 1900, is regarded as one of the most important voices of Art Nouveau in Germany. Edited by Otto Julius Bierbaum and Julius Meier-Graefe, the journal published numerous illustrations by well-known, and also unknown, young international artists. Additionally, there were full-page original designs, a simple modern typeface, vignettes and other forms of illustration.

Some of the more well-known artists who published in PAN include Peter Behrens, Franz von Stuck, Max Klinger, Käthe Kollwitz, Auguste Rodin, Paul Signac and Félix Vallotton. Like the journal Jugend, PAN was critical about the artistic policy of the German Empire under Wilhelm. The journal attempted to present the very best of contemporary art, without showing preference for any particular school or movement, in order to allow comparison with classical art.

Published by the co-operative PAN in Berlin the journal spans 5 volumes, containing in the first volume 1895/1896 five issues and all other volumes four issues. Therefore a total of 21 issues with 225 artistic supplements were published. The publishers were not interested in financial gain, but published “without reference to commercial, moral, personal or polemical questions, appreciating only the purely aesthetic viewpoint.” The publication of the journal was intended to support young artists and to inform the public.

Between 1200 and 1600 copies of each issue were published, most of which were sold on subscription. The standard edition in copper plate cost 75 RM, the luxury edition on imperial handmade paper cost 160 RM. The artist edition with additional original drawings on various expensive papers could only be purchased by members of the co-operative for 300 RM. This made PAN the most expensive German artistic magazine of its time. In comparison, an annual subscription to Jugend cost only 24 RM.

The history of PAN spans only five years, which can be divided into three different phases of varying quality. Each phase was marked by the influence of the various editors, the members of the editorial committee and the supervisory board. The first phase, for example, covers only three issues and was influenced by the editors Otto Julius Bierbaum and Julius Meier-Graefe.

The journal proved not to be to be commercially viable, not only due to its exclusive presentation and high price, but also due to its mixture of graphical art. literature, theatre and music. It had to stop publication in 1900. On the penultimate page of the last issue Ludwig von Hofmann presented a young man writing the word “end” in the sand. A new launch in 1910 under the direction of the Berlin art dealer and publisher Paul Cassirer only survived for 3 years.