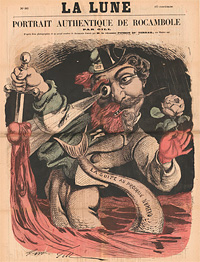 La Lune is the direct forerunner of the periodical L’Eclipse”. Both were edited by F. Polo with André Gill as their chief caricaturist and, therefore, also share the same format and structure.

Not only do the caricatures depict politicians and political affairs, they also offer unusual insight into the cultural life of metropolitan Paris. Artists, singers and writers were portrayed; illustrations depicting opera and theatre performances were published. Major contributors included amongst others Cham, Pépin, Demare and L. Petit. The periodical was first published in October 1865. After having published a caricature depicting Napoleon III in December 1867 the periodical was, however, banned and ceased publication on 17th January 1868.