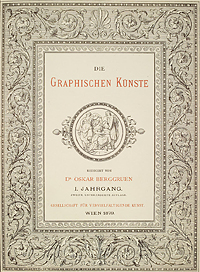 The magazine Die graphischen Künste appeared from 1879 until 1933 in Vienna. It was published quarterly in the format 38 x 40 cm as author's editions by the "Gesellschaft für vervielfältigende Kunst".

The content of "Die Graphischen Künste" in particular focused on contributions about graphic techniques, individual artists, collections and exhibition reports. For illustrations the magazine mainly showed graphics, book decoration and art supplements. At first it demonstrated its loyalty to the classic academic tradition. Later on, however, a closeness to the ideas of the Viennese Secession, which came up in the 1890s, and their magazine "Ver Sacrum" becomes evident. The original graphics were predominant to reproduced graphics. A further turn in the concept of the magazine and a strong tendency towards the Art Nouveau movement can be detected after 1904.

The editors of the magazine were always the respective secretaries of the society. During the first 25 years Oskar Berggruen held the position, then Richard Graul, Karl Masner, Friedrich Dornhöffer, Gustav Glück and finally Arpad Weixlgärtner. After the First World War Die Graphischen Künste lost importance. Although the magazine held its ground for several more years, it then turned mainly to historic topics. When the "Gesellschaft für vervielfältigende Kunst" closed down in 1933 also the publication of

A new edition with a smaller format existed from 1935 until 1941. It was published by Arpad Weixlgärtner and Augusto Callabi by the publishing company Badener Verlag Rudolf Rohrer and focused on graphics by old masters.

All articles contained in this magazine are indexed in the local online catalogue HEIDI and therefore also can be searched in the SWB and in arthistoricum.net.