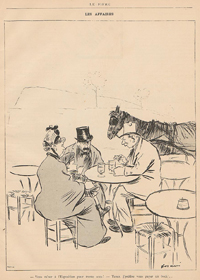 The 15 issues of the illustrated satire periodical Le Fifre were published in Paris from 23th February 1889 until 1st June 1889. Founder, editor and chief illustrator of the journal was the painter and caricaturist Jean-Louis Forain.

The periodical humorously dealt with the woes and joys of everyday life. Even though the journal was only published for a short period of time due to financial issues and although it almost fell into oblivion, it is today considered as one of the most distinguished periodicals of the 19th century. Le Fifre was published weekly, in folio, and each issue comprised four pages. Pages 1 and 3 consisted of full-page illustrations by Forain. The articles on page 2 were also written by Forain as well as Jean Richepin, Aurélien Scholl, Emile André, Paul Masson, Paul Hervieu and Jacques Le Lorrain; from issue 6 onwards the page also contained a poem by Armand Silvestre. On the last page there was an advert for ”Chocolat Menier“; the adverts were initially also illustrated by Forain.