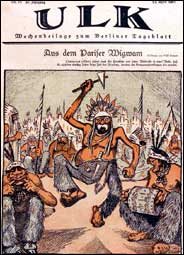 The digitization of Ulk (volumes 1914-1930) at the University Library of Heidelberg was supported by the Landesarchivdirektion Baden-Württemberg.

From 1918 to 1920 Kurt Tucholsky contributed to Ulk as an editor in chief, thus acquiring large readership because of the quarter million newspaper readers. He wanted to restore the good reputation of the jewish-democratic Ulk by eliminating jokes about World War I and exhortations to hold out. After Tucholsky had left