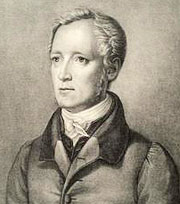 On the 23rd of August, 1781, Friedrich Tiedemann was born in Kassel. He studied medicine and science in Bamberg and Würzburg. In 1804 he earned his doctorate in medicine in Marburg, while continuing his studies in Würzburg and Paris. In 1805 he accepted a professorship in Landshut. Ten years later, in 1815, he accepted a position in Heidelberg, which he began in the summer semester of 1816. As the successor to Jacob Fidelis Ackermann he spend close to 33 years in the position of director of the Institute of Anatomy, until his retirement in 1849. Prior to his retirement he also filled other positions, such as Prorector, membership in the University academic senate and dean of the medical faculty. This was a time of great growth in the history of the Institute, in particular for the production of dissected anatomical and pathological specimens. 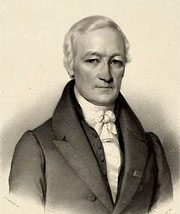 As was typical for the time, Tiedemann brought along his collection of specimens. During his tenure at the Institute many hundreds of anatomical specimens were prepared by him and his colleagues, such that Jacob Henle, his successor inherited a total of 2126 specimens. This collection included wet specimens, articulated skeletons and cadaveric specimens in which the lymphatic and circulatory systems had been injected with colored dyes. The collection included many zoological specimens, which could be used as comparisons to human material.

In collaboration with the University lithografer, Jacob Roux (1775-1830), Friedrich Tiedemann produced many impressive human anatomy books (“Tabulae arteriarum corporis Humani“). In 1837 he wrote “On the Brain of the Negro, compared with that of the European and the Orang-Outang“, a book which was first published in English by the “Philosophical Transactions of the Royal Society of London“. This book was a summation of his research postulating that the Negro brain was comparable to the European (Caucasian) brain and not to the Orang-Outang, a concept that was controversial for the time in which slavery was a common practice. This publication revealed his concerns about human rights.

Already in 1829 he had written “Aufruf an die Humanität der Höheren Behörden der Gerechtigkeits-Pflege in Deutschland“ (Appeal for the higher authority of equity in Germany), which was published in “Zeitschrift für Physiologie“. His goal was to protest against the inhumane execution by sword. However the last execution by sword took place in Heidelberg in 1844, 15 years after publication of his article.

Tiedemann was not only interested in describing the anatomical structures of the human body, he also wanted to characterize its function, and so he conducted physiological tests together with the chemist Leopold Gmelin (1788-1853), investigating digestion ("Die Verdauung nach Versuchen", 1826 -1827 and "Versuche über die Wege, auf welchen Substanzen aus dem Magen und Darmkanal ins Blut gelangen" 1820) and blood ("Versuche über das Blut", 1833). His and Gmelins work about the gallbladder of an ox ("Einige neue Bestandteile der Galle des Ochsen", 1827) still attract attention; they discribed a component called taurine which is currently used as an admixture in so called "energy drinks". It affects the development of the central nervous system, stimulates the influx and adhesion of calcium at the membrane of a cell,acts as an anti-inflammatory agent, regulates blood pressure, and is supposed to decrease the damage of alcohol in the liver.

Tiedemann was a member of numerous scientific boards and societies. In 1832 he was awarded “Ritter des Verdienstordens der Bayrischen Krone“ (Knight of the Order of Merit of the Bavarian Crown) and one year later an “Honorary Citizen“ of the city of Heidelberg. Tiedemann died in Munich on the 22nd of January, 1861. He was considered a highly recognized Anatomist whose judgment was

“Doctors without anatomy are similar to moles: they work in the dark and their daily tasks are mole hills“.

This dictum holds true for medical students to this day and is still quoted in nearly every German anatomy book.