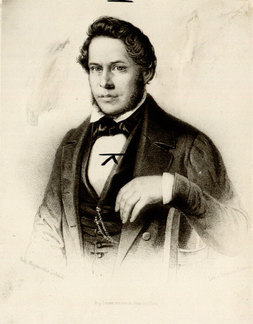 Friedrich Gustav Jacob Henle was born in 1809 in Fürth; the son of a tradesman. At the age of 19 he began studying medicine in Bonn, where just 4 years later he wrote his doctoratal thesis: „De membrana pupillari aliisque oculi membranis pellucentibus“. In 1833 Henle went to Berlin and received his state certification. The following year he became Prosector at the „Medizinisch-Chirurgischen Militär-Akademie“ (Surgical Military Academy) and in spring of 1840 he became the first anatomist in the newly founded University of Zurich. Disputes at the University led to his transfer to Heidelberg, where he taught beside Friedrich Tiedemann, but the two famous teachers‘ personalities clashed. While Tiedemann was a very traditional teacher, Henle was enthusiastic about new methods of teaching; for example, he introduced microscopic anatomy into the curriculum. After the turmoil created by the German revolution in 1848/49, during which time one of Tiedemann‘s sons was executed, Tiedemann resigned and Henle assumed his position. However, Henle was not happy in Heidelberg; he regarded the little town as very unprogressive and suffocating, so in 1852 he transferred to Göttingen, where he earned the reputation of a very successful teacher and researcher.

Henle was a social and charismatic person, his lectures where attended even by medical laymen. Gottfried Keller, an author from Switzerland, once visited Henle‘s talks and wrote about his impressions in his famous book „Der grüne Heinrich“ (Green Heinrich). Even Henle‘s private life became a topic in the literature during these days; he married Elise Egloff, a woman who once was a maidservant and nanny in Zurich, at the house of one of his colleagues. This liaison of course was considered revolutionary and improper, leading a few authors to write about the relationship. Without Henle‘s prior approval Germans could read about his personal life in books such as „Die Frau Professorin“ (Ms. Professor) from Berthold Auerbach, the very famous play „Dorf und Stadt“ (Village and City), written by Charlotte Birch-Pfeiffer and the novel „Regine“ from Gottfried Keller.

In 2004 letters between Henle and his, at this point, fiancee Elise Egloff were published under the title „Mein lieber, böser Schatz“ (My dear, nasty darling).

Beginning in 1844, Henle published with his friend Freund Karl Pfeufer (1806-1869) in the „Zeitschrift für rationelle Medicin“ (Journal of rational Medicine). Utilizing the new knowledge acquired with the use of the microscope, they wanted to redefine pathology.

One of Henle‘s most profound achievements was to establish microscopic anatomy into the curriculum of every medical student. His research focused on epithelium and its derivatives. He identified the endothelial layer in blood vessels, analysed the loop system in the kidney and described the root sheath of hair, which is important for its regeneration.