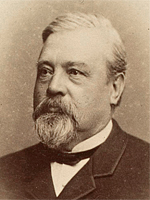 Carl Gegenbaur was born on August 21st, 1826 in Würzburg, where he studied medicine and also received his doctorate in 1851. He then left Germany for one year to study in Sicily. In 1854 he became a professor with his work "Zur Lehre vom Generationswechsel und der Fortpflanzung bei Medusen und Polypen".

Afterwards Gegenbaur accepted a professorship in Jena, and 3 years later he took over the position of the chair of comparative anatomy. In 1873 he became the head of the Anatomical Institute in Heidelberg, where he concentrated primarily on the evolution and morphology of mammals.

He founded the journal "Morphologisches Jahrbuch" and wrote many textbooks. During his years in Heidelberg he also became the Dean of the medical faculty and was a member of the academic senate. He was also a member of many scientific societies. In 1899 he became an honarary citizen of the city of Heidelberg. Gegenbaur died at the age of 76 in Heidelberg.

Digitized catalogues of the collections made by Carl Gegenbaur, held by Heidelberg University Archives