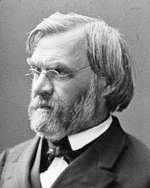 In July of 1816 Alexander Ecker was born in Freiburg where he also studied medicine and received his doctorate in 1837. Only 2 years later he was awarded a professorship and worked as a Prosector in Freiburg.

In 1841 Ecker went to Heidelberg, where he also worked as a prosector. Theodor Kobelt (1804-1857), Prosector in Heidelberg, and his co-worker Theodor Bischoff (1807-1882) had a violent public argument about a finding in the dissecting lab and its publication; an argument so violent that the government had to physically separate them.

Ecker and Kobelt exchanged their positions and workplace and 3 years later Ecker went to Basel, where he became a full professor of anatomy and physiology. Six years later he came back to Germany and in 1859 he assumed the position of chair of physiology and comparative anatomy in Freiburg. In Freiburg he also founded an anthropological museum. He was very interested in Anthropology and became involved in excavations. In particular, in the vicinity of the mountains called "Kaiserstuhl"; he examined the structure of old graves ("Reihengräber"). Ecker was a court counsellor and was one of the founders of the "Akademische Gesellschaft" (academic association). He retired in 1883 and died in May, 1887 in Freiburg.