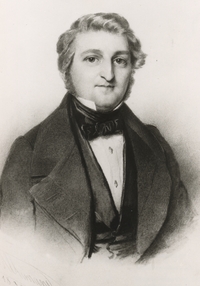 Ludwig Wilhelm Bischoff was born on October 28, 1807 in Hannover. He studied natural science in Bonn and earned his Ph.D. in 1829. One year later he went to Heidelberg to study medicine. In 1832 he earned his MD degree. His dissertation was entitled "De Nervi accessorii Willisii Anatomia et Physiologia".

After becoming state certified, Bischoff worked as an intern at the university maternity clinic in Berlin. In 1834 he was awarded a professorship in Bonn. His research focused on the integument of the human fetus (Beiträge zur Lehre von den Eihüllen der menschlichen Föten). In 1835 he became a university lecturer for comparative and pathologic anatomy and in 1836 he was promoted to associate professor in Heidelberg.

In 1837 Bischoff published a study on respiration, in which he proved that free carbonic acid and oxygen coexisted in blood. In September 1837a, Vincenz Fohmann, Friedrich Tiedemann's son-in law and former prosector, died in Brussels following mercury poisoning. Tiedemann's now widowed daughter, Cunigunda Tiedemann, moved to Heidelberg and in April, 1839 married Ludwig Bischoff. Bischoff and his bride moved to Giessen in 1843 where he became professor for Anatomy and Physiology, and founder of the newly designed institute, where he performed physiological experiments.

In 1844 he was awarded the Sömmerring price for his work. After ten years in Giessen he accepted a professorship in Munich. Embryologic experiments involving dogs, guinea pigs, deer, fox, martens and weasels eventually made him famous. In 1878 he retired due to health concerns and in December 1882 he died from perforation of the intestines which led to peritonitis.

Bischoff was not only a researcher but also a passionate university lecturer who was vehemently against the idea of women studying medicine because they were "anatomically" inferior. He wrote about his theory down 1872 in a book entitled "The Study and the practising of medicine by women" (Das Studium und die Ausübung der Medicin durch Frauen).