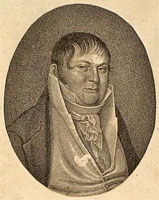 In 1765 Jacob Fidelis Ackermann was born in Rüdesheim. He studied medicine in Würzburg and Mainz, where he received his doctorate in medicine in 1788. In 1789, after spending one year in Austria, Italy and Switzerland he accepted a professorship in medicine.

In 1792 he became a professor in Botany and 4 years later a professor in Anatomy. In 1804 he accepted an offer from Jena, and on the 2nd of February, 1805 he became the first Anatomist at the University of Heidelberg.

Accompanying him were the following items from his collection: the skeletons of the two robbers, Schinderhannes and his cohort Schwarzer Jonas, a few specimen injected with wax, wet specimen preserved in alcohol, and dry specimen such as extremities.

In addition he founded an outpatient clinic, in which he volunteered his time to treat the poor. This earned him the respect and admiration of the people. His very engaging manner made him popular beyond Heidelberg’s boundaries, in particular with regard to his willingness to openly question Gall’s theory of Phrenology. Indeed in 1807 Gall traveled to Heidelberg to personally debate this issue with Ackermann in the Anatomical Theater.

On February 8th, 1807 the Heidelberger Morgenblatt referred to Gall’s unusual ability to pursuade his audience. He used Plaster of Paris molds as evidence for his theory. In contrast Ackermann demonstrated a dissected spinal cord to try to bring the discussion to a more professional level. In 1815, at the age of 50, Ackermann died of a kidney infection. After his death his brother decided to sell his collection, and the University and the Government chose to purchase it, ultimately for much less money than he had originally asked. Ackermanns successor, Friedrich Tiedemann, also brought his collection from Landshut to Heidelberg and the two collections where subsequently joined.