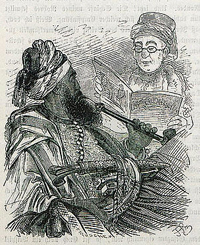 The journal Leuchtkugeln. Randzeichnungen zur Geschichte der Gegenwart („Flares. Marginal drawings referring to current history“) was published from 1848 until 1851 by the Emil Roller publishing house in Munch. Initially the frequency of publication was three times a month, at a later stage changing to weekly. Each set of twenty-four issues were counted as a volume; each issue containing eight pages and many illustrations. The subscription was 3 gulden or 1 reichstaler and 21 silver pennies per volume; an individual issue was 9 Rhenisch kreutzer and 3 silver pennies. In total seven volumes were published, i.e. 168 issues.

The illustrations and texts included in the journal mirror the liberal bias of the journal. Due to its acrid writings and ruthless illustrations, the Leuchtkugeln were under constant surveillance by and came into regular conflict with the state censorship board, which resulted in a legal ban of the journal in 1851.

After this ban of the journal in Munich, a new editorial office tried to publish Leuchtkugeln in Quedlinburg, failing after a short time and after only 13 issues.